I have to say I was pretty flattered today to see a twitter post about the new version of iPad Note Taker application by Dan Bricklin (the co-creator of VisiCalc and many other great programs).  The key UI innovation the video of this system shows is a way that allows you to take decent resolution notes with your finger. The system uses a magnified input area at the bottom where you write full sized and then the ink from that box gets shrunk down in the main body of your notes at the position of a "cursor". 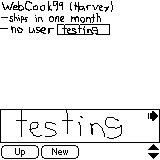 What is cool is that we (Richard Davis, myself, Bill Schilit, and Morgan Price) invented this technique back in the mid-90s for the NotePals system, which was an ink-based note-taking system for the Palm Pilot.  See the NotePals image at left. Although that device used a stylus, the problem was similar -- the screen was too low resolution and too small to take ink-based notes.  Take a look at the CHI 1999 paper describing the system.  Cool to see another research idea make it into product (again 10-15 years later -- are we working on the wrong problems if they take this long?)!
Posted by Unknown at 6:55 AM No comments: